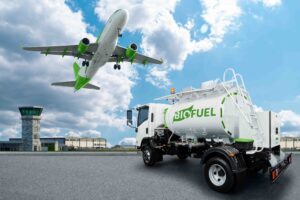 The global carbon standard for airports, Airport Carbon Accreditation, has today announced that 12 more airports in Europe have aligned their operational reality with global climate goals. Basel-Mulhouse Airport in France/Switzerland, Lisbon, Porto, Madeira, Faro, Flores, Porto Santo, Horta, Santa Maria, Ponta Delgada airports in Portugal, and Stockholm Arlanda and Göteborg Landvetter airports in Sweden have secured upgrades to Levels 4/4+ of the programme. They join a tight list of 14 early adopters globally1, airports that have already made this crucial step enabling deeper carbon cuts since the addition of the new levels in 2020.

The recently introduced Levels 4 and 4+ of Airport Carbon Accreditation come with a set of stringent requirements. These include alignment of an airport’s carbon management with the Paris Agreement, inclusion of additional emissions sources in an airport’s carbon footprint, notably covering all significant operational emissions from third parties including airlines, and enhanced stakeholder engagement geared towards effective partnerships to deliver emissions reductions.

Requiring airports to align their carbon management strategies and plans with the ambition of the Paris Agreement, according to which global warming should be limited to below 2⁰C and ideally 1.5⁰C, means that airports must define their reduction targets and associated emissions pathways accordingly.

Sweden’s two busiest airports, owned and operated by Swedavia, achieved the highest level of the global carbon standard for airports, Level 4+ ‘Transition’. Their accreditation builds on one of the strongest track records of airport climate action in the programme’s history: Stockholm Arlanda Airport was among the 17 pioneering airports which joined Airport Carbon Accreditation in its first year back in 2009. Göteborg Landvetter Airport came on board with the programme just one year later. Notably, both airports joined directly at the then highest level of the framework, Level 3+ ‘Neutrality‘, demonstrating an exceptional level of climate management maturity right from the start.

All Swedavia airports have been operating fossil-free as of 2020, becoming de facto Net Zero carbon emissions for all their operations – a worldwide first. Swedavia has now mapped out the next steps in their commitment to climate change, by supporting other companies and organisations at its airports in their own transformations. Airport Carbon Accreditation provides this additional dimension within the programme framework; as part of Level 4/4+ of Airport Carbon Accreditation, airports are required to develop a comprehensive Stakeholder Partnership Plan with the aim of motivating airport business partners and third parties active at the airport site to reduce their carbon emissions. One of the initiatives put forward by Swedavia’s airports in support of this was the introduction on 1 January 2022 of an incentive for all stakeholders active at Stockholm Arlanda Airport and Göteborg Landvetter Airport to start refuelling HVO (Hydrotreated Vegetable Oil), fossil-free diesel. The goal is now for all ground operations at every Swedavia airport to be fossil-free by 2025.

Basel-Mulhouse Airport has met all the necessary requirements to upgrade to Level 4 ‘Transformation’, having first joined the Airport Carbon Accreditation at Level 2 back in 2018.

In order to reduce CO2 emissions, EuroAirport, the company operating Basel-Mulhouse airport, is acting on two complementary levels. On the one hand, it is reducing its own CO2 emissions with a binding target. In October 2021, EuroAirport decided to set the Net Zero emissions target for its own infrastructure as early as 2030, instead of 2050. In order to achieve this, the airport is implementing a number of initiatives, such as the purchase of 100% green electricity, the replacement of the airport’s vehicle fleet with electric transportation and the gradual connection of the airport to an existing biomass powered district heating network.

On the other hand, the airport is also committed to reducing emissions across the entire platform in cooperation with its partners. Projects feeding into this goal include the future rail connection to the airport and a cross-company mobility plan that is supported by the French Government.

Understanding that climate change represents a global security challenge for humanity, ANA|VINCI Airports  proceeded to develop a rigorous framework to reduce its carbon emissions and to promote the decarbonisation of the broader aviation sector. The climate emergency is the key motivator for the group to accelerate their actions and to work collectively with partners to achieve better environmental results.

Up until now, the 9 Portuguese airports operated by ANA|VINCI Airports have been accredited at Level 2 ‘Reduction’. As a result of great commitment and an ambitious and global environment policy deployed across the entire VINCI Airports network, it was possible for them to upgrade by two levels and secure Level 4. This new level of accreditation means that ANA|VINCI Airports are actively reducing their CO2 emissions, through initiatives such as: 100% renewable electricity, fleet electrification and LED deployment, and forging effective partnerships to secure absolute emissions reductions across the airports’ sites.

To this effect, in June 2021, ANA|VINCI Airports launched the Stakeholders Carbon Forum in order to work with the main partners that operate at their premises to achieve an overall reduction of carbon footprint. The Forum is the main platform of collaboration between the airports and their partners, including airlines, handlers, major energy consumers and entities linked to mobility, such as city councils and transport companies. From this vast variety of stakeholders, dedicated working groups were created to define partnership plans focused on climate change and carbon management. ANA|VINCI Airports assume booster role in this process, in line with their firm belief that only joining efforts and sharing a collaborative path will enable faster and more significant results towards positive mobility.

Olivier Jankovec, Director General of ACI EUROPE, said: “I am delighted to witness more and more airports reach the two highest levels of Airport Carbon Accreditation. These achievements mean that airports are not only committed to addressing and eliminating emissions under their own control, but that they also embrace their role as catalysts for climate action across their entire sites. Airports are uniquely placed within the air transport eco-system, acting as the industry’s representation on the ground, connecting a global industry to the local communities they serve. This unique position makes it part of their DNA to serve as platforms for greener, smarter, more climate-friendly operations and solutions. I would like to wholeheartedly congratulate all twelve airports on their excellent results.”