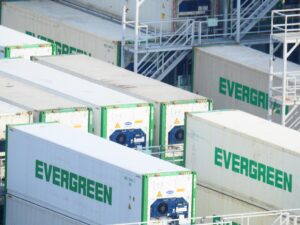 British-based Drewry, a consultancy to the global maritime and shipping industry, says it expects trade in the seaborne, temperature-controlled cargo sector “to accelerate over the coming years, to expand at an average annual rate of 3% to 2026.” That’s an optimistic forecast, given the slowdown in international trade this year and talk of a pending recession, and it’s driven by strong consumer demand for perishables of all kinds.

The growth in refrigerated cargo at Florida’s Port Everglades is a good example.

Port Everglades handles the most perishables of any Florida seaport – more than 30 percent. Nationally, it ranks sixth for reefer exports and seventh for imports. The U.S. Department of Agriculture recently underscored a strong rebound in perishable cargoes when it noted a 16 percent increase in fruit imports year-over-year.

One of the more exciting developments for the port is the opportunity to increase “speed to market” through agreements with shippers such as CMA CGM and its upcoming Americas XL service, which offers a new trade lane that allows it to bring goods directly from the West Coast of South America to the East Coast of the U.S. Daniels says this service provides direct connectivity and improves efficiencies for CMA CGM while showcasing the port’s ability to help its partners increase revenue and maintain cold-chain logistics.

Looking to the future, Everglades, which has strong ties to Latin America and the Caribbean, is also focused on developing mutually beneficial relationships with shippers in the Mediterranean, Europe and Asia. “Port Everglades is well on its way to securing a solid East-West trade lane with a new connection to India, Turkey and Greece through Mediterranean Shipping Company (MSC),” notes Daniels.

One of the biggest challenges for seaports across the U.S. and the globe is infrastructure. “We’re exploring creative and environmentally sensitive ways to address this issue,” Daniels says. “Fortunately,  there’s sustained demand for cold storage capacity that the port is positioned to capture.”

On the West Coast, the port of San Diego gets the bulk of its reefer business from the bananas, pineapples and other perishables imported mainly from South America by Dole Fresh Fruit Company. In fiscal year 2022, 1,038,302 metric tons of this cargo were handled at the port’s Tenth Avenue Marine Terminal.

In 2021, it played host to two small, refrigerated “opportunity vessels” in addition to the Dole business. The opportunity cargo included packaged fruit cups, juice concentrate and chilled fruit from Central America, Thailand and the Philippines. “This cargo service will take time to develop and, as a result, we don’t anticipate having regular service calls with it until 2024,” notes Greg Borossay, the port’s Principal, Maritime Business Development.

As for new infrastructure, two years ago the port completed the first phase of a project to modernize the Tenth Avenue Terminal. As part of that project, says Borossay, two outdated warehouses were torn down to allow for extra laydown area at the terminal. Removing the warehouses also helped improve the route trucks take from the Dole area of the terminal to the company’s dock.

The Port of Wilmington, Delaware, is one of the U.S.’s primary gateways for fresh fruits, and it’s having a banner year in 2022 according to Joe Cruise, CEO of Gulftainer USA Wilmington (GTW), the company that operates the port.

Volume has increased by over 35 percent in 2022. However, reefer reigns supreme. “Refrigerated cargoes account for the majority of all cargo handled at the Port of Wilmington,” Cruise says, “so it’s important that we’re constantly improving our facilities and reviewing our processes, technologies and capabilities.”

The port saw big increases in Moroccan clementines, Chilean grapes, and juices from several countries including China and Turkey. In August, it received its first-ever shipment of summer fruit on a new fortnightly service from the West Coast of South America. Citrus fruits from Chile and blueberries from Peru were shipped to Wilmington by Seatrade and Global Reefers.

“The Port of Wilmington, which is Safe Quality Food (SQF)-certified, has worked hard to put itself in a good position to take advantage of new business from all over the world,” Cruise says.

Despite the significant increase in throughput during 2022, GTW has been able to reduce fuel consumption due to full utilization of its $38 million refrigerated container storage project, which uses electric-Rubber Tired Gantry Cranes (e-RTGs), a preventive maintenance program, and other fuel-saving initiatives to improve yard and gate efficiency and reduce diesel consumption/emissions along with equipment expense.

Preparing for the 2022-2023 winter fruit season, upgrades have been made to warehouses and cargo-handling equipment to maximize efficiency.

“Our first Moroccan clementine vessel arrived on November 21 to kick off the season, and all indications point to Wilmington having another highly successful season and exceeding last year’s volume,” Cruise notes, adding that the design of a brand new, 1.5 million TEU container port at Edgemoor, north of the port, is under way with construction to begin in 2023. The new port will include 240,000 square feet of refrigerated warehouse space.

Across the Pacific, the Port of Nansha, part of the Guangzhou Group and the fastest growing port in southern China with over 24 million TEUs in 2021, is well on its way to becoming a major international cold chain logistics hub.

The second, three-building phase will be similar in size and cost as the first three units and is expected to be ready in 2024. When complete, total storage capacity for the six buildings will be 460,000 metric tons. In addition to the three finished buildings, Nansha International Cold Chain has completed a refrigerated stockyard and a supporting exhibition building.

Relying on the advantages of port and rail transportation, the company says its focus will be on meat, fish, fruits and vegetables while building a comprehensive cold chain logistics base with hub-type cold storage at the port, providing customers with one-stop services including inspection and storage, bonding, centralized sterilization, processing and distribution, and other supporting value-added businesses.

In Europe, the port of Valencia, Spain – the busiest on the Mediterranean – is seen as an important reefer cargo connection for agricultural products to international destinations like China, the U.S., Brazil, Canada and Saudi Arabia. Its optimal strategic location, very close to both importers and exporters, makes it a key port for this type of traffic in the Mediterranean.

As a strategic enclave for reefer traffic, Valenciaport continues to make progress in providing the necessary resources to facilitate the movement of perishable goods with 92 regular services to five continents for perishable products, which allows access to many more markets. It currently has 3,250 electrical connections for refrigerated containers as well as refrigerated warehouses for perishable goods including the CSP Iberian Terminal (COSCO) with 1,500 reefer connections, the MSC Terminal with 1,000 and APM (Maersk) with 750.

Between January and September of this year, Valenciaport handled 171,892 refrigerated containers. Of these, 37 percent were dedicated to exports, mainly other foodstuffs such as meat products, fruit, vegetables, pulses (dry grains) and chemical products. Imported TEUs represented 13 percent and were focused on fruits, vegetables, pulses and frozen fish. The remaining 50 percent were transit containers, more than half of which contained food and agricultural products.