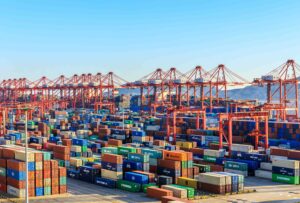 The vast majority of Shanghai’s 26m citizens ventured outside today, some to a park, others to see families, and many back to workplaces where dust had been gathering from the extended lockdown that rocked China’s largest city this spring.

Originally meant to be a snap nine-day lockdown, authorities pursuing president Xi Jinping’s strict zero-covid policies extended the municipal confinement for a total of 65 days, and even on Wednesday, Shanghai’s keenly anticipated lockdown liftoff day, there are plenty of restrictions in place that those involved in international supply chains will need to be aware of as they rush to move goods onto ships for an earlier than usual peak season.

“Shanghai’s phased-in reopening may only represent a respite rather than a turning point,” economists at Nomura said in a note. “The real turning point will be marked by a shift in China’s stance on its zero-covid strategy rather than headline covid-19 caseloads, the easing of some lockdowns or monthly activity data.”

Giving a sense of how June 1 is not a total return to pre-lockdown norms in China’s financial hub, it’s important to bear in mind there are at least 650,000 residents still confined to their homes, and an estimated 500,000 delayed containers that will need to be rushed through the port, the world’s busiest container facility.

While restaurants can resume serving dining in is not allowed. Cinemas, museums and gyms remain closed. And most children will not return to face to face schooling. All residents will now be required to show a green health code – on their smartphone – to leave their home compound or building and access most places. Those who wish to move around the city will be required to show a negative PCR test result, no older than 72 hours.

Getting out of the city remains problematic. Any resident travelling to another city in China faces quarantine of between seven to 14 days on their return with one BBC reporter noting today how it is now easier to fly out of Shanghai to foreign climes than it is to go an hour down the rails on a high-speed train to Hangzhou.

From today, businesses will no longer need so-called white list approval to have employees working on site. However, those wishing to get to work will still be required to present a negative covid test 72 hours before taking public transportation.

In a sign of how the Communist Party of China is determined to stick to its covid strategies, across the nation’s major metropolises – including Shanghai – a network of tens of thousands of lab testing booths are being set up with the goal of having residents always just a 15 minute walk away from a swabbing point.

For truckers, which has been the most acute cargo transport concern during China’s recent rolling city lockdowns, passes will continue to be required depending on where they are headed in the provinces. Trucking availability is reported to be improving, albeit costs are highly elevated.

Greater economic activity from today is expected to see a pick up in national oil usage and imports. In April, the last month of reported statistics, China’s refineries were running at only 12.6m barrels per day, an annual reduction of 10.8% compared with the same month the previous year. Meanwhile, domestic oil production in China has inched up to 4.1m barrels per day, while imports have levelled out at 10.5m barrels per day, according to data from broker Lorenzten & Co, which has predicted Chinese buyers will now come in more heavily with import requirements for crude, revitalising the eastbound trade for VLCC tankers.

The stimulus package includes plans to accelerate infrastructure construction and stimulate purchases of cars with Beijing also vowing to help the depressed real estate markets. China’s home sales slump persisted in May. New-home sales plummeted 59% in May from a year earlier for China’s 100 biggest real estate developers, according to preliminary data from China Real Estate Information Corp. The drop matched April’s decline as the biggest this year.

Shanghai’s shipbuilders, meanwhile, have vowed they would try to get their production schedules back on track, most of them having issued force majeure measures when lockdown measures were first introduced in late March.

China’s Caixin/Markit Manufacturing Purchasing Managers’ Index (PMI) stood at 48.1 in May, improving slightly from 46.0 the previous month but staying below the 50-point threshold that separates contraction from expansion. Moreover, PMI results from many neighbours including Japan, Taiwan, Malaysia and the Philippines eased off in May, showing how integral Chinese manufacturing is in Asian supply chains.

Many chambers of commerce in China have reported how their members are looking at moving some manufacturing out of China following Beijing’s heavy-handed zero-covid tactics. In significant related news today, Nikkei Asia is reporting that for the first time ever Apple is moving some iPad production out of China and shifting it to Vietnam.