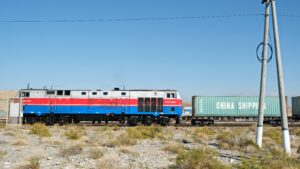 A third cross-border railway port will be constructed between China and Kazakhstan. The facility will be situated between the Baktu port in Tacheng, Xinjiang and Abai Oblast in Kazakhstan, north of the two existing rail ports between the countries. This was revealed by Kazakh Ambassador to China Shahrat Nureshev at a press conference held by the Embassy of Kazakhstan in China.

The two countries discussed the possibility of a third railway port earlier this year but had not revealed the location yet. It is not clear what the timeframe is of the project. However, the urgency of additional capacity at the border has been acknowledged.

However, the two terminals are often congested. When it comes to trains between Europe and China, they account for 90 per cent of all the traffic, and then there is regional rail freight traffic. Because Eurasian traffic is prioritised over regional traffic, the latter is jeopardised in case of congestion at the border.

The shortage of capacity at the border is a well-known problem and over the years, a solution was found in the expansion of the capacity at the existing terminals. The Khorgos Gateway dry port in Kazakhstan commissioned a new set of 1435mm rail tracks in its facilities this year With the new tracks, the terminal increased its handling capacity from 9-10 daily trains to 19-20 trains per day.

A third railway port was already envisioned by the Chinese government when it drafted the China-Europe Railway Express Construction and Development Plan (2016-2020). In 2019, the Karamay-Tacheng railway line was opened, which laid the foundation of the third cross-border channel.

China is the largest trading partner of Kazakhstan. Over the past 30 years, the volume of trade between the two countries has increased more than 70 times and will reach 25.2 billion US dollars in 2021. From January to September of this year, the trade volume reached 23.2 billion US dollars and increased by 22.5 per cent.