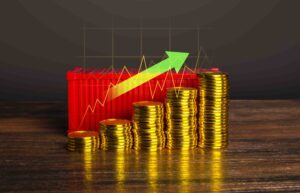 Average operating margins for the container industry are unprecedented in the history of shipping. Having gone through all Q1 results, the latest data from Alphaliner shows that the leading carriers are now generating a margin of 57.4%, versus an average of just -0.2% in the decade preceding the pandemic.

Taiwan’s Evergreen was crowned the winner in the latest quarter. It achieved an operating margin of 68.6%, just slightly higher than compatriot Yang Ming’s 68.1%.

What’s more, even if the spot market wobbles between now and the end of the year, it looks like liners will continue to post extraordinarily strong results, based on the latest slew of long-term contracts signed.

Leading carriers are generating a margin of 57.4%, versus an average of just -0.2% in the decade preceding the pandemic

May saw the highest monthly increase in long-term contracted ocean freight rates since Oslo-based Xeneta started tracking these shipments, as the cost of locking in container shipments soared by 30.1%.

The unprecedented hike, revealed in the latest Xeneta Shipping Index (XSI) public indices for the contract market, means that long-term rates are now 150.6% up year-on-year.

By the end of 2022, the container shipping industry will have earned an unprecedented half a trillion dollars of operating profit from two years of supply chain pain and record freight rates, according to estimates from research firm Drewry.

Having made a record $190bn last year according to Drewry estimates, the liner shipping industry is on track to post new profit heights in 2022.

The container shipping industry profits in the first quarter of 2022 beat out those of FANG—an acronym for Facebook, Amazon, Netflix and Google—by 103%, expanding the gap from last year’s fourth quarter when liner industry profits beat FANG’s by 14%, according to analysis by Blue Alpha Capital.

McCown has maintained his initial profit forecast of $220.5bn for the container shipping industry in 2022.