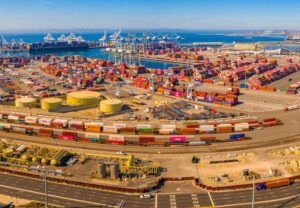 The question is whether that release of pent-up goods will again swamp West Coast ports that have recently emerged from the pandemic’s massive cargo wave, they and other experts said.

The Port of Shanghai was open during the city’s shutdown, but cargo flows still slowed. Area factories that make everything from Tesla electric vehicles to Apple laptops ran out of components and quarantines idled some truckers.

As the city returns to normal, trade should follow.

“We will have some form of a surge, given the delay of cargo volume from Shanghai and China overall,” Mario Cordero, executive director of the Port of Long Beach, said on the sidelines of a Reuters Events logistics conference in Chicago.

“To what extent that surge will be remains to be seen,” Cordero said.

The Los Angeles/Long Beach port complex is the busiest in the United States. The Port of Shanghai is its second-biggest source of container trade cargo, behind Port of Shenzen.

When Shanghai closed, some factories there re-routed goods to other ports that trade with Southern California.

April imports soared 9.2% to a new monthly record at the Port of Long Beach.

“The question is – but for lockdowns and slowdowns, what would have been that percentile?” said Cordero. He expects the Shanghai surge to begin this month – landing alongside back-to-school goods, Fall fashions and early Christmas shipments.

April imports fell 6.8% at the Port of Los Angeles, giving it a chance to prepare for the Shanghai uptick. The port thinned its cargo backlog and cut the queue of ships waiting to unload to about two dozen – the lowest number in about a year, Executive Director Gene Seroka, said in a telephone interview.