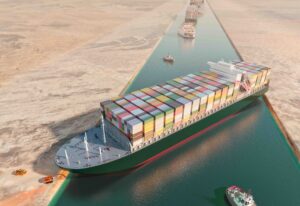 French reinsurer SCOR has estimated claims relating to the 2021 grounding of the Ever Given containership in the Suez Canal will top $2bn.

The six-day blocking of the canal in March last year was shipping’s most high profile accident this century. The ship remained in Egyptian waters for three months with the Suez Canal Authority and vessel owner, Shoei Kisen Kaisha, locked in a battle over compensation for the incident. Once freed in July, the ship made its way slowly to northern Europe, offloading much delayed cargoes, before returning through the canal en route to northern China where extensive repairs were carried out.

“The grounding of the giant Ever Given has shown the world the hidden reality of our economic system,” Sylvain Gauden, chief underwriting officer for marine and energy reinsurance at SCOR, stated in a new report looking at the overall impacts of the grounding.

Gauden recounted the conditions the giant Ever Given faced as it entered in a convoy heading north on March 23 last year.

A sandstorm, poor visibility, a strong south wind and some miscommunication combined to make the Ever Given accelerate in the narrow channel, rendering it unmaneuverable, Gauden explained. The 400 m long ship slipped from one side to the other, finally lodging sideways across the canal and blocking the route.

“The big lesson is that some sand and wind can potentially cause a tragedy of global proportions. This demonstrates the fragility of our economic and social models,” Gauden said.

In total, SCOR, one of the world’s largest reinsurers, estimates as many as 400 ships were blocked in total, with a host of other vessels deciding to avoid the area entirely and take the longer route via the Cape of Good Hope.

“As reinsurers we need to measure our potential exposures. Container vessels are getting bigger, yet at the same time, there is a shortage of containers. This is leading some shippers to move cargo in inadequate bulk carriers,” commented Gregory Delaisse, SCOR’s global head of marine and transport.

Claims from the grounding include physical damage to the Ever Given, loss of revenue on the part of the Suez Canal Authority, the cost of the salvage operations and business interruption for owners and charterers of the blocked vessels, loss of perishables and cargo delays, as well as damage to the canal itself.

SCOR said it would take many more years to settle the claims from the Ever Given.

“Reinsurers will have to absorb the bulk of the claims, which could amount to more than $2bn,” SCOR stated.

According to MarineTraffic, the Ever Given is currently in the Taiwan Strait today, bound for Shenzhen, firmly back operating on regular Asia – Europe tradelanes for charterer Evergreen.