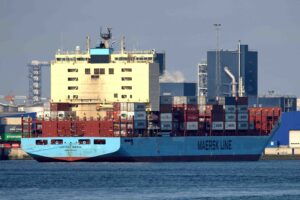 Maersk will deploy two of its ice-class containerships to its Canada Express service connecting Northern Europe with Canada.

The two ships, Vistula Maersk and Vayenga Maersk, are set to replace existing vessels on the service and provide Canadian customers with “green logistics solutions.” This is because the ice-class vessels feature an optiminized propeller and rudder design for low fuel consumption, and will also utilize biofuel, a carbon-neutral fuel that is manufactured from recycled sustainable biomass.

Vistula Maersk and Vayenga Maersk are among the world’s largest ice-class containerships. They are two of six ships in Maersk’s series ice-class feeders designed specifically for operation in winter conditions (down to -25 degrees C).

The vessels previously operated in the North and Baltic Seas for SeaLand (formerly Seago Line), Maerk’s intra-regional and short-sea carrier, connecting Rotterdam with St. Petersburg, Russia. However, because of Russia’s invasion of Ukraine, Maersk has ceased all vessel operations in Russia and service with Belarus.

In 2018, a third ship in the ice-class series, Venta Maersk, made headlines when it sailed through the entire length of the Northern Sea Route on its maiden voyage from China to Russia. Maersk at the time said the one-off passage through the NSR was for research and training purposes, and not a sign that it was experimenting with alternatives routes even as the NSR becomes more accessible to shipping.