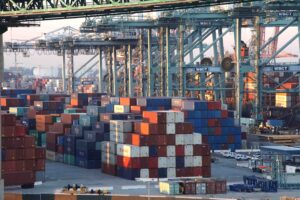 For months, the ports of Los Angeles and Long Beach have been threatening ocean carriers with exorbitant fees for long-dwelling containers at marine terminals, only to repeatedly postpone the launch of the program. But could continued congestion at the San Pedro Bay Port Complex mean these fees may actually come to fruition?

According to Maersk, the world’ second largest shipping line, the likelihood of the ports implementing the controversial “Container Dwell Fee” has risen “significantly” over the past month due to ongoing congestion issues.

The ports have apparently dismissed Maersk’s claims, at least according to a report by Tradewinds.

The Container Dwell Fee program, first announced October 25, 2021, would charge ocean carriers with compounding daily fines for import containers dwelling in marine terminals beyond an 8-day grace period. However, implementing the program has been left to the discretion of the executive directors of each port, and so far they have opted to postpone the program each week since its launch as they continue to monitor the situation.

Under the program, the ports can charge ocean carriers for each loaded import container dwelling for nine or more days for both truck-bound and rail containers (originally, rail containers would be charged starting at 6+ days). The fee starts at $100 per container on the ninth day a container sits at a marine terminal, increasing in $100 increments per container per day until the container leaves the terminal (i.e., $200 for day 2 past the limit, $300 for day 3, and so on).

For the tens of thousands of long-dwelling containers at the ports, these charges could easily and quickly generate tens of millions of dollars in revenue for the ports, funds they have promised will be earmarked for programs designed to enhance efficiency, accelerate cargo velocity and address congestion impacts.

However, ocean carriers will simply act as “collection agents” and any fees assessed will be ultimately passed to the shippers, threatening to add even more fees on top of already sky-high shipping costs that have contributed to inflation.

The ports have boasted that the program has been effective in helping to move cargo containers out of marine terminals to make room for more imports and empties to be shipped back overseas. According to the latest announcement postponing the program, the two ports reported seeing a combined 48% decline in the amount aging cargo on the docks since the initialy announcement on Oct 25.

According to latest data released by the ports, as of May 26 the Port of Long Beach had a combined 12,189 import containers dwelling nine or more days, while at the Port of Los Angeles the number stands at 20,993 import containers that would theoretically be assessed to the fee if implemented. Combined, that’s 33,182 containers that would be charged $100 on the first day that the fee is implemented, at least if were implemented today. That’s $3,318,200 in fees assessed on day 1!

“Given that congestion continues to impact vessel and landside supply chain operations, the likelihood of the [Biden Administration] implementing the fee has risen significantly this month,” Maersk said in an May 24th update on the program.

“Since last year’s announcement, supply chains have endured even more disruptions, including the COVID-19 pandemic, historic levels of goods coming into the U.S., geopolitical conflicts, and challenges in global markets. In addition, the ILWU and the PMA have initiated labor negotiations for a contract that expires July 1st in advance of shipping peak season. In its efforts to counter these supply chain stressors, the Biden Administration has tasked its “Supply Chain Disruptions Task Force” and the U.S. Dept. of Transportation to enact strategies they believe will mitigate disruption,” Maersk added.

So while the question of whether or not the fees will actually be assessed remains unanswered, but for the first time in a long time this will be something to watch, especially those of you who have cargo moving through the Southern California gateway.

“We understand the fee implementation could put all parties involved in a difficult situation as truck, chassis, and warehouse capacity are all extremely stretched,” said Maersk. “We ask for your continued support in prioritizing the pickup of ageing cargo as we work together to restore fluidity of the marine terminals and inland hubs for a more reliable supply chain.”