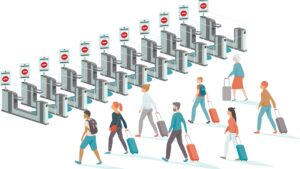 The report shows that passenger traffic across the European airport network increased by +70.4% in July compared to the same month last year. This was largely driven by international traffic (+102.5%) rather than domestic traffic (+11.8%).

When compared to pre-pandemic (July 2019) levels, passenger traffic in July stood at -14.4% – a further improvement compared to the previous month (-17.3% in June).

When compared to pre-pandemic (July 2019) levels, passenger traffic in the rest of Europe was almost aligned with the EU+ market in July at -13.5%.

Olivier Jankovec, Director General of ACI EUROPE said: “July has kept delivering a much needed boost in passenger traffic for most of Europe’s airports, driven by revenge – and still predominantly leisure – travel, as well as Ultra Low Cost Carriers expanding capacity well above pre-pandemic levels. As the EU+ market has been very much driving the recovery and traffic volumes are finally getting closer to pre-pandemic levels, it is essential that the EU brings its airport slots rules back to normal – requiring airlines to effectively use these slots for 80% of the time during the forthcoming Winter season starting end of October. This is precisely what the European Commission has proposed based on a thorough market analysis – with all the necessary flexibility to duly account for travel restrictions still affecting some markets. Going back to the 80% usage rule is essential at this critical and dynamic juncture in the recovery from the COVID-19 pandemic. This is about ensuring an effective use of scarce airport capacity for the benefit of air connectivity, consumers and businesses.”

When compared to pre-pandemic (July 2019) levels, passenger traffic at the Majors in July stood at -16.9%, mostly a reflection of continued travel restrictions to parts of Asia.

Amongst other hubs and large airports3:

Regional and smaller airports also came very close to a full passenger traffic recovery in July compared to pre-pandemic (July 2019) levels, with airports with less than 10 million passengers per annum4 at -3%.

Freight traffic across the European airport network decreased by -3.1% in Julycompared to the same period last year – with EU+ airports losing -2.4% and airports in the rest of Europe -7.6%. This reflects the continued impact of the war in Ukraine and in particular disruptions to global supply chains.

Aircraft movements increased by +33.7% in July compared to the same period last year.