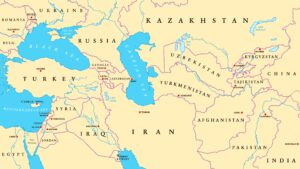 A seventh short-sea service has been added on the Caspian Sea, facilitating Middle Corridor traffic flows. The crossing of the Caspian Sea is considered a bottleneck on the corridor between Europe and China, which is seeing rapid growth this year. How does this extra vessel help?

It was only in September this year that the number of vessels on the landlocked sea in Central Asia was doubled, from three to six. A seventh service was added after that, said a representative of KTZ Express at the European Silk Road Summit, recently held in Duisburg. As the capacity of the Middle Corridor is still limited, any additional space is welcome.

The Caspian sea crossing, which is either between the Azerbaijani port of Baku and Aktau or Kuryk in Kazakhstan, or Turkmenbashi in Turkmenistan, is a lengthy procedure. The Baku-Aktau journey for example is 350-km long. According to Kelvin Tang from CEVA Logistics, this journey takes seven days to be completed.

“One of the challenges on the Middle Corridor is the long waiting time for a vessel, on the Caspian Sea or the Black Sea”, he said during the same summit. As a result, the ports easily get congested, and it takes longer than needed for the cargo to be reloaded on the train. This makes the transit time of this route less attractive, he noted.

What does an extra vessel mean?

Depending on the vessel type, the loading capacity is 350 TEUs or 125 TEUs. The six vessels that sailed the Caspian Sea in September were good for a collective capacity of 1200 TEUs. According to Leila Batyrbekova, an industry insider, the six vessels were able to provide with ten departures per week, good for 6000 TEUs per week. However, she took into account a much faster transit time of 3-4 days when she made this calculation.

It is not clear how much capacity the seventh service has added, but in the best case, the fleet of seven vessels is good for 1550 TEUs. With one additional departure per week, the fleet could handle 6600 TEUs of cargo per week, facilitating around 70 trains.

How much is the demand

When looking at the volume growth on the Middle Corridor itself, the figures are more significant. According to the ADY Container, which is involved as a railway company providing traction on the corridor, cargo transportation increased by 45 per cent in the first ten months, compared to the corresponding period of the previous year.

The main challenge remains the organisation of the feeder service, the director of the railway company noted. Currently, the transit time is around fifty to sixty days, and the cost 30 per cent higher than the northern route. In such a case, ocean shipping is more attractive for many shippers.

“The route is not competitive yet in terms of regular service, travel time and cost”, said Schwilling. Even if sanctions against Russia are tightened further and the northern corridor becomes unusable, he expects the corridor to benefit little.