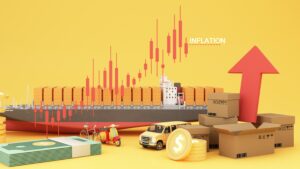 As the “R” word, “recession” is increasingly being used by economic forecasters, questions are abounding regarding the impact of potential economic slowdowns on the container shipping realm. The jury is still out on impacts, and on the choices of which shipping data that economists might input into their models.

A just-released report from vessel visibility trackers Windward, in conjunction with freight analysts at Freightos, who produce indices on containerized freight in conjunction with London’s Baltic Exchange, is titled “Falling Demand for China-U.S. Ocean Freights Hasn’t Yet Impacted Container Movement.”

In it, the authors suggest that: “A year-on-year comparison of March to June 2022 vs. [the same period in 2021] shows a drop in the number of vessels and, even more so, of TEU capacity out of China and headed to U.S. ports in June 2022 compared to both the previous month and the previous year.”

This observation is the subject of a lengthy disclaimer, pointing to uncertainties related to U.S.-bound vessels still on the water (and therefore with uncertain counts of TEUs to be discharged at U.S. ports), as well as uncertainties where vessels have not formally declared a U.S. destination. Indeed, the report suggests that, given various assumptions about freight that might be U.S. bound, there is the potential for “a 5% increase in June compared to May, and a 2% increase year-over-year for the entire period.” Talk about a definite maybe!

Looking backward is probably easier than the perilous job of forecasting, and the report notes that: “Freightos Baltic Index data shows that the current spot rate of $7,326 per 40’ container on the Asia-U.S. West Coast lane is less than half the rate in the last week of April.” The authors add that: “But as rates have continued to fall through June and into July –even as Shanghai has reopened and capacity may be decreasing –a drop in underlying demand was likely also a cause of falling rates in May and is the most likely culprit keeping rates declining since early June.” They also point to a huge contrast of the present time with the year-ago situation in July 2021 which marked the beginning of a meteoric climb.

In his analytics, he looks at data from two providers. Container Trade Statistics shows a market still tweaking upward in May 2022 based on a metric including contract rates, which would be lower, in absolute $/box, than spot in today’s backwardated markets).  He also takes data from Drewry  whose spot measuring World Container Index, reflecting high absolute $/box rates, shows a market trending lower since a peak in Q3 2021 (this seems to conform with the Freightos Baltic metric).

In his article, McCown writes that: “The sharp price increases in container shipping during the pandemic have contributed to overall US inflation in a recognizable way. While only a relatively small percent of total loads actually move under spot rates, the spot rates play a meaningful role in the level and trend of rates in contract renewals moving the large majority of overall loads.“  All this presents another set of “maybes”.

Getting deeper into his analysis, he opines that: “we’ve developed a view that the prevalence and credibility of spot rates are broadly misunderstood. As a result, we see this leading to confusion and uninformed decisions at best and manipulation and bad decisions at worst.”

In advance of a discussion in his article about how big cargo interests have misused data on container rate increases, he cautions market participants, analysts, and outsiders (including government regulators) that: “[spot rates] don’t reflect the level and trend of the larger group of contract rates that drive both the overall inflation impact and the profitability of the container shipping sector. Spot rates may well be the three card monte of container shipping.”

In his detailed economic analysis, he hones in on “10% of total container loads worldwide moving under spot rates, with the remaining 90% moving under contract rates.” More on card sharks in a minute.

McCown goes on to suggest that: “The impact of container shipping can therefore only be measured by looking at all loads and not just the relatively small group moving under spot rates. The best overall metric for that is the global pricing index issued monthly by Container Trades Statistics (CTS),” he says.

Back to the card players:  Where cargo interests point to rates up 400+% (the spot measure) in press releases and exhortations then picked up by the Biden administration, should they, instead, be looking at contract rates, which have seen a more gradual rise?

Questions of this sort are highly relevant because of provisions in the newly enacted Ocean Shipping Reform Act of 2022 (OSRA 2022), which, as pointed out by John McCown and others, requires more disclosures from the carriers, while greatly increasing the Federal Maritime Commission’s ability to institute enforcement actions against carriers in response to complaints about their business practices.

Definitely not a place for “maybes”.