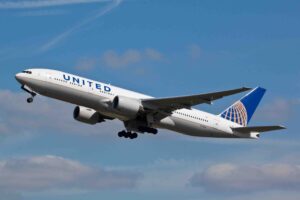 United Airlines is adding a significant amount of cargo capacity to its fleet with the return of 52 Boeing 777-200 large passenger jets out of service for more than a year, while at the same time trimming second-quarter flight schedules because of labor and other constraints amid rising travel demand.

The developments underscore that the airline industry’s recovery from the pandemic isn’t a straight-line path.

The Federal Aviation Administration on Monday greenlighted the reintroduction of United Airlines’ (NASDAQ: UAL) Pratt & Whitney-powered 777s that were grounded in March 2021 after an uncontained engine failure over Denver. The final service bulletins provide specific details on how to implement previously issued directives for precautionary engine modifications and conduct enhanced inspections.

The first of the 777s is scheduled to begin flying next Thursday and about 30 to 35 of them will be in service by July, the heart of the busy summer travel season.

“And we’re training up [pilots] on the 777s, so by later this year, we can fly the full fleet,” Nocella said.

With tremendous lower-deck storage, the planes will provide a welcome injection of freight capacity in the Asia-North America market where transport supply is extremely tight because of shipping demand and reduced aircraft utilization. COVID restrictions forced Hong Kong-based Cathay Pacific and other airlines to reduce Asia operations during the spring and the Ukraine war has eliminated most Russian all-cargo carriers from the market.

“Trans-Pacific is still way off … [but] they were filling our airplanes with a lot of cargo going across the Pacific. And where cargo yields are right now, amazingly it offsets the mediocre load factors that we’re seeing” on the passenger side, Nocella said.

Spot rates from China to the U.S. West Coast and Midwest have nearly doubled since early April to more than $20 per kilogram because of extensive flight cancellations into China, according to the Freightos Air Index.

United last year generated record cargo revenue of $2.4 billion. First-quarter sales improved 119% from pre-pandemic levels to $627 million and were 26% better than a year ago even though cargo revenue ton miles — tons multiplied by distance traveled — were 1.7% lower than in 2019 at 791 million.

The Asia-Pacific region’s international passenger demand for March was only 17% of pre-COVID levels, according to the International Air Transport Association. The main drags on business are China, where a no-tolerance COVID policy has closed down many cities and cross-border flights, and Japan because of caps on inbound arrivals, as well as testing and quarantine requirements for travelers.

United currently operates four flights a week to China compared to about 10 or 11 per day normally.

Management said it is scaling back the number of available seats by one point from its previous estimate because of staffing challenges, primarily among its regional airline partners, which will increase per-unit operating costs. And it estimated a significant jump in fuel costs to $4.02 per gallon from $3.43 in its prior estimate. Despite the headwinds, the company expects adjusted operating margins to remain at about 10%.

“We feel pretty bullish that this [consumer demand] can continue for quite some time. It will be quite a while before the consumer balance sheets are back to where they were in 2019. So we feel like the leisure part of this is really strong and will continue as far as the eye can see,” said Nocella. “But the great part is the business part, which is continuing to bounce back rapidly here in the United States and across the Atlantic.”

Analysts also expect United to get a bigger bump than its peers from the late recovery in international and business travel because of its exposure to those business segments.