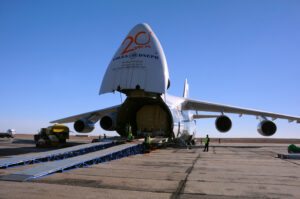 Struggling to stay afloat in the face of crippling Western sanctions on Russia, all-cargo airline Volga-Dnepr has narrowed its scope of operation to supporting Russian supply chains’ access to Asia with only Russian-built heavy freighters.

The government of Moscow last month hired Volga-Dnepr to provide cargo transport to and from a handful of Asian and Middle Eastern nations, aboard its five Ilyushin-76TD-90 quad-engine jets, according to a statement shared with FreightWaves. The deal runs through the end of the year.

Volga-Dnepr also has a dozen Soviet-era An-124 super freighters in its fleet, which continue to operate on a limited basis for project logistics customers. In mid-March, the company shut down its two subsidiaries that rely on Boeing (NYSE: BA) aircraft because of sanctions on its leased aircraft and the revocation of airworthiness certificates by aviation registries in Bermuda and Ireland.

The 9.5 billion rouble ($144 million) Moscow contract is part of the effort to maintain access to vital goods such as pharmaceuticals, medical devices, food, electronics, consumer goods, equipment and spare parts after Russia was cut off from a vast chunk of the global economy for its invasion of Ukraine.

Volga-Dnepr will provide regular air cargo service to Moscow and other cities from China, India, the United Arab Emirates, Azerbaijan, Pakistan and Vietnam.

Co-founder Alexey Isaykin said the company is also thinking about expanding its fleet with the purchase of additional An-124 and Il-76 aircraft, which will keep manufacturing workers in the country’s beleaguered aviation industry employed.

Volga-Dnepr previously cooperated with the city’s transport department in 2020 to deliver personal protective equipment and other items for combating COVID-19.

The United States, European Union, Canada and other countries banned Russian aircraft from their airspace and airports after the invasion of Ukraine. The U.S. and EU also banned the transfer of parts and technology necessary to maintain aircraft from Boeing (NYSE: BA), Airbus and other manufacturers. Under U.S. export controls, Russian airlines must also obtain a license to conduct any flights with U.S.-origin aircraft. And the EU required aviation leasing companies to terminate their leases with Russian carriers.

Volga-Dnepr’s scheduled airline AirBridgeCargo (ABC) is no longer flying its 17 Boeing 747 freighters, including 13 late-model 747-8s plus a Boeing 777 because of U.S. and European sanctions. Subsidiary Atran Airlines, which handled regional flights to Europe and Asia with four Boeing 737-400 and two 737-800 narrowbody aircraft, has also been grounded.

Earlier this month, CargoLogic Germany filed for bankruptcy protection as it looks for new investors so it can restart operations, according to a report by Simple Flying. The company, which focuses on the European express market with a fleet of four leased Boeing 737-400 standard freighters, is registered in the United Kingdom and owned by Isaykin, who holds dual citizenship in Russia and Cyprus. Sister company CargoLogicAir, based at London Stansted Airport, has also ceased operation.

The elimination of Volga-Dnepr aircraft from the market has reduced air cargo capacity for shippers when supply remains tight because of COVID-reductions in passenger flights, preventing a steeper drop in rates as demand softens.

Volga-Dnepr allegedly told AerCap (NYSE: AER) that it was attempting to return the planes but that it needed approval from Russian customs authorities, which it never got, according to the London filing reviewed by the publication. Volga-Dnepr has continued to use the planes in Russia while refusing to pay rent, AerCap charged.

The Kremlin essentially seized Western aircraft in retaliation for the sanctions with a law allowing Russian carriers to transfer Western-made aircraft to the Russian aviation registry and use the foreign aircraft to fly domestic routes. Under international law, aircraft must be deregistered from the original registry and owners must give permission before they can be placed on another registry.

Prior to the Russian invasion, Dublin-based Aercap had 135 aircraft on lease with Russian airlines, representing about 5% of its fleet by book value. The first-quarter report on May 17 confirmed the company recovered 22 aircraft that were outside of Russia when sanctions were imposed, but that 113 aircraft remain in the country. It took a $2.4 billion charge to completely write off assets in Russia and Ukraine.

Aercap said it has submitted insurance claims for about $3.5 billion worth of aircraft and engines remaining in Russia.