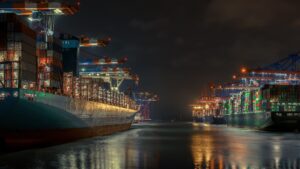 With a record orderbook looming, tonnage supply could outstrip vessel demand next year with analysts at Alphaliner warning this week that the liner shipping market could be headed towards structural overcapacity.

Record boxship deliveries are forecast for 2023 and 2024. In absolute terms, today’s 7m teu vessel orderbook has pushed past the former 6.6m teu record of 2008 (see chart below). In terms of capacity, 56% of today’s assigned vessel orderbook is earmarked to the world’s top five carriers, either through ownership or charter commitments.

“Liner shipping’s traditional peak season barely materisalised in 2022 and many industry observers feel that the slump is structural, rather than seasonal, with fears of a global recession,” Alphaliner warned in its most recent weekly report, adding: “War risk, skyrocketing energy costs, political instability and general inflation will impact overall consumer spending and thus trade volumes.”

On top of these factors, the easing of coranaviurus related mobility restrictions has seen consumption patterns revert towards travel at the expense of shopping, while the worst port bottlenecks have been clearing up in recent months.

“All this means that a huge number of new large containerships are going to hit the water in 2023 at a time of stagnating demand,” Alphaliner warned.

And for those suggesting next year’s EEXI and CII regulations might provide some fleet soaking salvation, experts at Alphaliner downplayed the effect of next year’s International Maritime Organization rules. Liner service speeds have already come down notably over the past decade with Alphaliner pointing out how Asia-Europe services that used to turn in eight weeks in the 2000s, for example, now often turn in 12 or 13 weeks.

Plenty of data emerging shows that this year’s peak season has proven to be far weaker than previous years.

“What has happened to peak season? It just doesn’t seem to have materialised, does it?” Peter Sand, the well-known analyst at Xeneta, was quoted in a Splash report from late last month. The weeks ahead look similarly anaemic with a host of services now being suspended.

The dramatically altered situation has even seen top liners admit trouble is brewing. For instance, Hapag-Lloyd’s next virtual panel discussion, which will feature its CEO among others, is entitled ‘After the boom – now the doom?’

“Falling rates, especially on the Asia – US west coast lane, could soon push prices below the break-even point per container for some ocean carriers as their costs have also climbed with inflation,” warned Judah Levine, head of research at Freightos, in a market update this week.