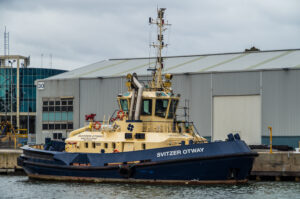 Australia is a day and a half away from seeing many of its most important ports shuttered with frantic discussions ongoing to avert a supply chain crisis brought about by dire relations between sea going staff and the nation’s largest towage operator.

Svitzer’s decision to lockout nearly 600 staff at 17 ports from this Friday was branded today as “economic vandalism” by a minister in the Anthony Albanese-led government.

The towage operator, which has 100 vessels operating in Australian waters, has faced multiple strikes from staff over the past three years as it looks to overhaul its pay structure. With the industrial actions worsening in recent weeks, Svitzer, a unit of Denmark’s AP Moller-Maersk, announced on Monday it would lock out staff belonging to three unions on Friday.

Australia’s Fair Work Commission has decided to intervene, holding a brief hearing on Wednesday, listing the hearing before the full bench in Sydney tomorrow. A further hearing will be held on Friday morning if necessary.

The commission will consider whether “the indefinite lockout of employees … is protected industrial action for a proposed enterprise agreement that is threatened, impending or probable”.

The commission said it decided to intervene as the indefinite lockout threat has the potential to “cause significant damage to the Australian economy”.

Australia’s workplace relations minister Tony Burke, speaking at the National Press Club today, commented: “What Svitzer are attempting to do is economic vandalism.”

Burke has urged Svitzer to hold off on locking out its workers until new laws to arbitrate industrial disputes are in place.

Burke said earlier this week that the government’s industrial relations bill would give the Fair Work Commission the power to arbitrate “intractable” disputes, something he hoped would be in place within three weeks.

Svitzer’s dominance of the local towage scene – and the fallout from a potential lockout – has led to calls this week for the sector to be nationalised.

“This company’s social licence to operate should now be in doubt, and an inquiry into how a multinational Danish owned company can be allowed to hold an entire country to ransom through this campaign of employer-led industrial militancy must be held so we never again find ourselves vulnerable to this corporate piracy,” said Maritime Union of Australia national secretary Paddy Crumlin.

“While some will view this as momentary – arguing that it will pass in a few days time – the real impact on the Australian economy will reverberate for months,” argued Jonathan Kempe, the CEO of Sydney-based freight and shipment booking marketplace Shipz today. “Such chaotic situations can be avoided if the current course of action is rapidly resolved,” Kempe added.