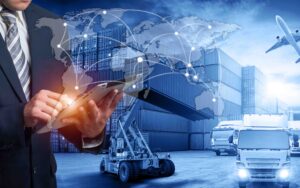 Global supply chains are knotting up from China to Denmark, sparking re-examinations of things as macro as globalization itself and micro as trucking efficiency around American ports.

As for the big picture, the intertwined world economy took decades to stitch together and will take years to play out, however it evolves. In the meantime, economists are squinting to see the more granular, short-term shifts that the pandemic and Russia’s war in Ukraine are forcing on consumption, investment, production and trade.

Some observers say now is a good time to focus on different metrics than traditional measures of employment, prices and gross domestic product.

“The way we look at the global economy needs to change,” said Steven Barrow, a currency strategist at Standard Bank. “No longer should we look at growth, inflation and monetary policy through the lens of demand. Instead, it is supply that’s key.”

Before the pandemic, the supply of goods and services was what economists would generally call “elastic” — flexing easily to match demand. “But now supply has turned from being elastic to inelastic, meaning that the response to changes in demand are far less,” Barrow said in a note.

With that in mind, here are a handful of unorthodox supply-side scopes to peer through:

Many economists, including the team at Bloomberg, have developed indexes or colorful heat maps to show the degree of stress on supply lines. In a research note this week, BNP Paribas SA analysts released their latest tracker and it showed some April indicators flashing orange and yellow.

They look at traditional gauges like delivery times and order-to-inventory ratios, along with alternative numbers like air cargo rates and the number of anchored vessels outside the Port of Los Angeles. “Disruptions are back and here to stay,” they wrote.

A Moody’s Analytics measure shows supply stress in the world’s two biggest economies, the U.S. and China, is still hovering well above the pre-pandemic norm.

Disruptions stemming from the Ukraine conflict steepened those graph lines in February, but now the blame lies primarily with China’s Covid-related woes, which have forced 15% more ships to wait in waters off the ports of Shanghai than at the same time last year, said Steve Cochrane, the firm’s Asia-Pacific chief economist. That’s reversing the improvement that started in the final quarter of 2021, he added.

On the receiving end of many shipments from China are the neighboring ports of Los Angeles and Long Beach, which handle about 42% of all U.S. containerized trade with East Asia. So a little-watched indicator of cargo fluidity is worth monitoring.

The share of shipping containers dwelling at the ports for more than five days rose last month to 38.7% from 34.3% in February, ending three months of improvement, according to data from the Pacific Merchant Shipping Association. The figures also showed the dwell time for rail-bound containers rose to 7.7 days from 5.2 days in February. Whether that continues to deteriorate is important both economically and politically: Improving cargo flowing through Southern California’s ports has been an objective of the Biden administration.

Congestion is also worsening at European ports, which are suffering more than their American counterparts from disruptions tied to the war in Ukraine. Banned Russian cargo has to be separated from other goods and rerouted or stored — adding work and using up resources that ultimately serves as a drag on shipping capacity. But not all ports are forthcoming with timely data, so private companies are filling the void.

According to Chicago-based FourKites, a supply-chain visibility platform, the average dwell time for export containers at European ports was 10.8 days as of April 24, up from 9.2 in mid-February. For imports, the wait rose to 6.5 days from 6.2.

The corporate victims of the snarls are piling up like containers in locked-down Shanghai. Apple predicted that supply constraints would cost $4 billion to $8 billion in revenue this quarter, joining Microsoft and Texas Instruments on the list of firms whose sales are crimped by China’s Covid-19 restrictions.

But according to Drewry, a shipping research and consulting firm in London, not everyone will be a loser in year three of the global supply-chain drama. For the container shipping industry, the profit windfall may hit $300 billion this year, up from $214 billion in 2021, Drewry said in its latest forecast report. Drewry says it expects global freight rates will increase by 39% this year as the logjams last into the first half of 2023.

That will also create a favorable environment for companies like transport and logistics giant Kuehne + Nagel International.

The Swiss company has developed its own disruption indicator called Seaexplorer. At its peak the end of February, the measure showed about 17 million container waiting days — essentially cargo that’s bogged down in congestion globally. Two or three weeks ago that number had fallen to about 6 million and this week it had crept up to about 7.5 million.

“It’s increasing day by day and we are working and living in a very competitive market environment,” Kuehne + Nagel CEO Detlef Trefzger said on a conference call this week.