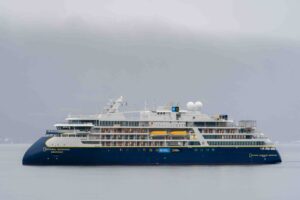 Ulstein has unveiled its vision for a nuclear-powered mobile charging station ship that the company says could have huge potential for the maritime industry and its ambition to decarbonize.

The 149-meter-long Replenishment, Research and Rescue (3R) concept, named ‘Thor’, would feature a Thorium Molten Salt Reactor (MSR) to generate vast amounts of clean energy. So much energy in fact that the vessel is envisoned as a mobile power station for battery-powered expedition cruise ships operating in some of the most remote regions of the world, enabling true zero-emission cruise operations.

“We have the goals, ambition and environmental imperative to switch to zero-emission operations, but, until now, we haven’t had the solution,” said Ulstein CEO Cathrine Kristiseter Marti. “We believe ‘Thor’ might be the answer we’ve been looking for. ‘Thor’ is essentially a floating, multi-purpose ‘power station’ that will enable a new battery revolution.”

To demonstrate the concept, Ulstein has also developed the ‘Sif’ concept, a 100-meter expedition cruise ship that will run on batteries and use the ‘Thor’ to recharge while at sea. Thor would produce enough power capability to simultaneously refuel four of the Sif expedition cruise ships, while Thor itself would never need to refuel.

“Expedition cruise ships operate in increasingly remote, and environmentally fragile, areas. At the same time, the industry faces growing pressure from diverse stakeholders to preserve nature as it is and ban the environmental impact of cruising,” said Marti. “‘Thor’ enables replenishment of energy and supplies on site, while also boasting the technology to facilitate rescue operations, as well as conducting research tasks. It is, in effect, a crucial piece of infrastructure to support sustainable and safer operations. ‘Thor’ literally has the power to change our entire industry.”

According to Ulstein, thorium has been identified as having huge potential for a maritime industry hunting for clean alternative fuels. The Norwegian shipbuilder says MSRs are safe, efficient and operationally proven solutions that work by dissolving thorium – an abundant, naturally occurring metal with low radioactivity – in liquid salt. The ensuing chain reaction heats the salt, producing steam to drive a turbine and create electricity. Although there have been some developments on land, its potential for delivering clean power to the maritime industry has yet to be incorporated into a vessel design.

“MSRs have enormous potential for enabling clean shipping. There is so much uncertainty over future fuels, but here we have an abundant energy source that, with the right approach, can be safe, much more efficient, cheaper, with a smaller environmental footprint than any existing alternative,” said Jan Emblemsvåg, a Professor at the Norwegian University of Science and Technology and expert in the field of Thorium and nuclear power generation.

Ulstein describes the concept as being “the missing piece of the zero emissions puzzle” for a wide range of maritime and ocean industry applications.

“Here we have two concepts in one to showcase a cleaner, safer and more sustainable way ahead for cruise ship owners and operators, not to mention maritime in general,” said Øyvind G. Kamsvåg, Chief Designer at Ulstein. “‘Thor’ and ‘Sif’ demonstrate what is possible when we approach challenges from a new direction.”