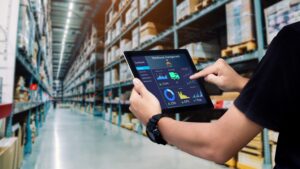 Capacity constraints have moved from the water to land as companies tie up transport equipment, triggering backups across freight networks

The struggle for shipping capacity that has been a hallmark of pandemic-era snarled supply chains is shifting inland, with the transportation equipment crucial to moving goods growing increasingly difficult to find.

Logistics executives say sea containers and the steel trailers needed to ferry goods on trucks are being tied up for weeks at a time while companies store goods on the equipment because warehouses are brimming to capacity.

The practice is triggering lengthy backups at inland distribution hubs including Chicago and Kansas City, Mo., that officials say are as bad now as at any time during the Covid-19 pandemic.

”Right now the backup goes right to the warehouse and distribution center where those facilities are chock-a-block,” said Mike Wilson, chief executive of Consolidated Chassis Management. CCM, based in Budd Lake, N.J., manages about 80,000 chassis, the steel trailers used by truckers to pull containers between ports, rail yards and warehouses.

According to company data, CCM’s trailers earlier this month around Kansas City and St. Louis were tied up under equipment for an average of almost 33 days, up from about 20 days at the start of the summer and about 10 days before the pandemic.

The inland bottlenecks are growing as congestion is easing in other parts of global supply chains. Some Gulf and East Coast ports are still seeing surges in cargo. But overall, demand for space on container ships is waning, according to Denmark-based Sea-Intelligence, and backups at the nation’s busiest container port complex at Los Angeles and Long Beach, Calif., are at their lowest levels in more than a year.

The scene is quite different at inland rail yards. Union Pacific Corp. and BNSF Railway Co. have been limiting container shipments recently from Southern California into overstuffed freight hubs in the Chicago area, reviving actions they took last summer to ease congestion.

Tom Williams, group vice president for consumer products at BNSF, said it is cheaper for shippers to store cargo in a container atop a chassis than to incur higher fees for leaving the box in a rail yard. But the practice leaves fewer trailers available at rail yards, making it harder for other shippers to pick up boxes.

The transport equipment is needed to recover more imports at ports and for exporters to load up their goods for shipment to overseas markets.

Shortages of logistics equipment have plagued supply-chain executives throughout the pandemic. The bottlenecks in 2021 were often caused by importers rushing in goods to feed consumer demand, triggering backups at warehouses that didn’t have enough workers to unload boxes.

This summer’s congestion comes as consumer demand for goods is waning and retailers’ warehouses are stuffed with excess inventories.

Chris Caton, managing director of global strategy and analytics at logistics-property giant Prologis Inc., said the vacancy rate in the firm’s top 30 U.S. markets is 3%, down from 4.3% one year ago and well below the typical range of 5% to 10%. Prologis warehouses are so full, Mr. Caton said, that many are approaching a functional ceiling at which smooth operations begin to break down.

Similar shortages are grinding down logistics operations across other parts of the supply chain.

Bill Shea, chief executive of Charlotte, N.C.-based chassis lessor Direct ChassisLink Inc., said that because of the extended time his trailers are stuck beneath containers it takes 26,000 more of the trailers to move 11% fewer shipments. “It’s an artificial shortage of equipment across the nation,” he said.

The inland congestion is less visible than the backups of container ships at major U.S. ports that came to symbolize supply-chain congestion in 2021. But executives say it is just as disruptive for shippers and logistics companies trying to move goods.

Bensenville, Ill.-based logistics services provider STG Logistics is parking containers wherever it can find land, and even leasing yards for customers while they wait for warehouse space to open up. “It’s almost like when a snake eats a rat,” said STG Chief Executive Paul Svindland. “I think we are looking at through the end of the calendar year before all this stuff gets pushed through.”