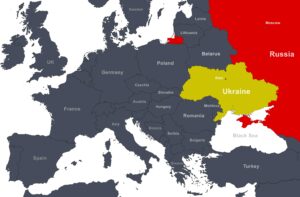 On the surface, the tiny Ukrainian navy, just 5,000 active-duty sailors and a handful of small coastal boats, appears to be significantly overmatched by Russian maritime forces.

The Kremlin’s Black Sea fleet consists of over 40 frontline warships. The Russians seem poised to cut off the Ukrainian economy from access to the sea — essentially re-creating the Anaconda strategy U.S. President Abraham Lincoln used in the 19th century to choke off the Confederacy.

But Russian success is hardly guaranteed, as the Ukrainians are proving as surprisingly stalwart at sea as they have been on land, already pulling off a handful of successful engagements against Russia’s naval forces.

What does the maritime component of the Ukrainian war look like in the months ahead?

Just over a decade ago, I visited the Crimean port of Sevastopol and had lunch with the Ukrainian chief of naval operations, Viktor Maksimov. We were able to walk out onto the bridge wing of his flagship and surveil the Russian navy just up the waterway.

This was before the 2014 invasion of Crimea by the Russians, but even then, the Ukrainian admiral correctly said: “Sooner or later, they will come for this port. And their fleet is much stronger than ours.”

At the time, I discounted the idea of a full-fledged invasion, but Russian President Vladimir Putin has now proved me wrong twice. Sevastopol is very much in Russian hands, and it affords them a distinct advantage in potential combat at sea.

The Russians have over three dozen capable combatant ships with immediate access to the crucial waterways of the northern Black Sea, and at least partial control over 60% of Ukraine’s coastline from Crimea through the Sea of Azov to the Russian mainland. Ukraine has lost its major warships, which were seized or destroyed in 2014, and has to take a guerrilla approach. So far, it is playing a weak hand very well.

The shocking sinking last month of Russia’s Black Sea flagship, the cruiser Moskva, was a good example of how the Ukrainians are going to approach war on their coast. They used an indigenously produced short-range cruise missile, the Neptune, and caught the Russians off guard. A failure of the Russian air-defense system, coupled with poor damage control, led to the loss of the ship, its heavy cruise-missile battery and (according to the Ukrainians) hundreds of its crew of around 500.

The upshot of both the strike on the Moskva and the sinking of the two gunboats is that the Ukrainians intend to contest control near the coast. Western hardware will be essential of course — the U.K. has pledged to deliver hundreds of antiship Brimstone missiles this month — but so will real-time intelligence and targeting. In war at sea — where ships cannot hide behind terrain features, obviously — this is crucial. The battle of Midway in World War II, for example, turned in America’s favor almost entirely on the ability of U.S. intelligence to direct the outmanned naval force.

The Russians will have to come up with new strategies. This might include using the sea as a “flanking zone” to come around the lines of the Ukrainian defenders on land, similar to the bold move by General Douglas MacArthur in landing at Inchon on the Korean peninsula in 1950.

Another possibility would be blockading Ukraine’s most vital port, Odesa, to try to sever the Ukrainian economy from global markets. Third, the Russians will likely try to provide intense supporting fire from the sea against Ukrainian targets ashore — they recently demonstrated the ability to launch a land-attack cruise missile from a submarine, for example.

To counter, the Ukrainians can take a page from their land forces, which have been destroying Russian tanks and armored vehicles by the hundreds using relatively inexpensive weapons provided by Western allies. The U.S. Navy’s SEALs have a good range of capabilities to disable shipping, and some of these systems should be made available to the Ukrainians.

It’s worth considering an escort system for Ukrainian (and other national) merchant ships that want to go in and out of Odesa. This would be similar to the Operation Ernest Will escorts provided to merchants in the Gulf during the Iran-Iraq War in the 1980s. (I participated in those as operations officer on a U.S. cruiser).

The West could also give training in anti-ship warfare to the Ukrainian navy outside the country, perhaps in nearby Constanta, Romania. (The Romanians recently began providing an outlet for Ukrainian goods from that port.)

At the high end of the confrontation/risk spectrum, the allies might consider a humanitarian maritime mission to evacuate civilians (or even Ukrainian military forces) from the doomed city of Mariupol. Designating this a humanitarian effort would make it difficult for Moscow to attack the ships taking part, but they should be appropriately armed combatants prepared to defend the mission.

The vast Black Sea is mostly international waters. NATO warships are free to travel nearly wherever they want, including into Ukraine’s territorial waters and its 200-mile exclusive economic zone. Conceding those waters to Russia makes no sense. Instead, look for them to become the next major front in the Ukraine war.